So I’m in New York right now, at the RWA conference. (Having a great time, and yesterday I learned some very awesome news from my Berkley publicist that I hope to share soon!)  Anyhoo… yesterday also happened to be the premiere of Transformers 3, and the premiere was literally across the street from the conference hotel.

Now, my four year-old son is obsessed with Transformers.  Last night at the Literacy signing, I heard a rumor that there was a life-sized replica of Bumblebee in the middle of Times Square.  Unfortunately, I was so busy that I didn’t get the chance to get outside and take a photo.  So, intrepid mother of a four year-old boy that I am, I stole away from the conference for a half-hour this afternoon to sneak a quick picture and–

I asked one of the Times Square safety officers if I was in the right location, and he told me they’d taken everything down after the premiere last night. While we were talking–and after he teased me about getting all dressed up to see Shia LeBoeuf (ha)–I explained I’d been hoping to get a photo of Bumblebee for my son.

Hearing that, Safety Officer Lamar promptly took out his cell phone and offered to text me the photos he had taken the day before.  And after I show these pictures to my son, and tell him that there was an “actual” Transformer outside of my hotel, I will officially be the Coolest Mom in the World.

So thank you, Safety Officer Lamar, you saved the day.  Who says New Yorkers aren’t friendly?

Here are the photos, in case anyone is curious (or also has a four year-old son obsessed with Transformers). 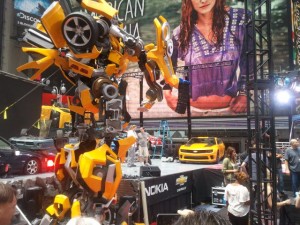 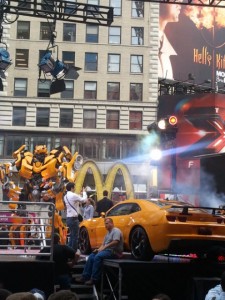 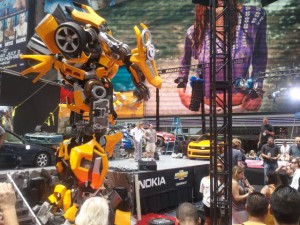