The FBI wants her cooperation.

As the daughter of a billionaire and the owner of the city’s top wine store, Jordan Rhodes is invited to the most exclusive parties in Chicago. But there’s only one party the FBI wants to crash: the charity fundraiser of a famous restaurateur, who also happens to launder money for the mob. In exchange for her brother’s release from prison, Jordan is going to be there—with a date supplied by the Bureau.

As the top undercover agent in Chicago, Nick McCall has one rule: never get personal. This “date” with Jordan Rhodes is merely an assignment—one they’re both determined to pull off even if they can’t be together for five minutes before the sarcasm and sparks begin to fly. But when Nick’s investigation is compromised, he and Jordan have no choice but to pretend they’re a couple, and what starts out as a simple assignment begins to feel a lot like something more. . . 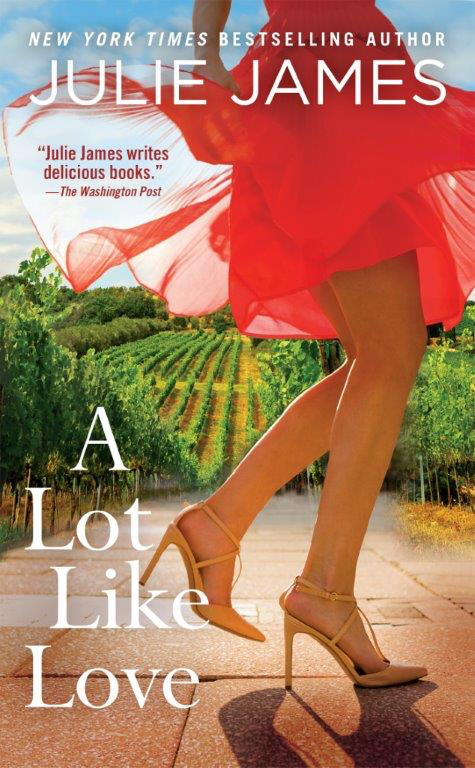 “With a nod to Alfred Hitchcock’s Notorious, this latest from James (Something About You) blends plenty of sparkle with a vineyard-full of oenological detail…. Sexy fun, romance fans will pop their corks over this one.” —Library Journal

“James’ sassy, suspenseful sequel to Something About You (2010) exhibits her trademark sizzle and wit while focusing attention on another FBI undercover agent assigned to ferret out the secrets of Chicago’s Mob. James pits Nick McCall’s bad-boy appeal against Jordan’s warm heart in a classic romance trope and concludes with tantalizing hints about future installments set in the same intriguing venue.” —Booklist

← view more acclaim
“With only four books under her belt, Julie James has cemented her place as one of contemporary romance’s superstars.” —San Francisco Book Review

“Julie James. . . is mastering the genre of romantic suspense. Her latest book, “A Lot Like Love,” is full of romance, criminals, FBI agents and even a “Twitter terrorist.” If you want a fast-paced read with drama, suspense and love, you’ll want to check out James’s novel.” —News-Gazette

“In this endearing romance, James writes characters so real you can almost reach out and touch them. A delicious blend of romance and suspense, A Lot Like Love is entertaining from beginning to end.” —RT Book Reviews

“I had a great time reading the book and loved watching yet another tough FBI agent meet his soul mate where he least expected her.” —Dear Author

“Julie James writes what I like to call “light romantic suspense” exceptionally well, and A LOT LIKE LOVE delivers. I love these stories with just the right balance of charm, love, action, and touches of humor and suspense. Once I started reading, I couldn’t put this book down.” —Fresh Fiction

“There’s a whole lot to love about A Lot Like Love from Julie James. This is a superb read, plain and simple.” —Babbling About Books

“I’ve said it before and I’ll say it again: Julie James’s books ROCK! Her writing is smart and sexy; each plot is fresh and unique; and each book contains characters that are truly remarkable and stick with you long after you finish their story.” —The Romance Dish

“Julie James has quickly jumped onto my auto-buy list with her quick-witted, sexy characters and her deft ability of telling tales full of a delightfully fresh quality. If you’ve not yet sampled her books, I highly suggest putting her on your radar. In A LOT LIKE LIVE Ms. James has crafted a fabulously funny story with two great characters that are a perfect match for each other.” —Night Owl Reviews (Reviewer Top Pick)

see a list of all of Julie's international editions ➞