**Please note: the giveaway is now closed.  Winners will be announced shortly.

I’ve been talking about this for a while now, so I’m thrilled to finally be able to share the cover for my next release, About That Night.  I think the Berkley art department really knocked it out of the park with this one! 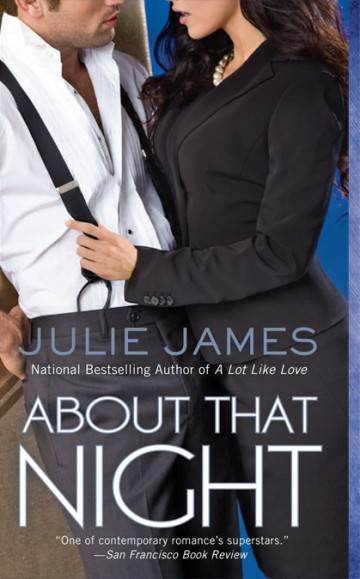 Though Rylann Pierce tried to fight the sparks she felt for billionaire heir Kyle Rhodes the night they met, their sizzling chemistry was undeniable. But after being stood up on their first date, Rylann never expected to see him again. So when she finds herself face to face with Kyle in a courthouse nine years later, she’s stunned. More troubling to the beautiful Assistant U.S. Attorney is that she’s still wildly attracted to him.

BUT SHE’S MAKING THE RULES

So there you have it.  Anyone who would like to find out more about About That Night can read an excerpt here. The book will be available April 3rd.

Now, as many of you know, the hero in About That Night makes his first appearance in my current release A Lot Like Love (where we learn why, exactly, he’s in prison). So to celebrate the upcoming release of Kyle’s book, I’m giving away three copies of A Lot Like Love.  The giveaway will be open until 10pm CST tomorrow (Friday) and is open to everyone, including international readers.  All you have to do to enter is leave a comment below.

135 thoughts on “About That Night cover and excerpt (and a giveaway!)”